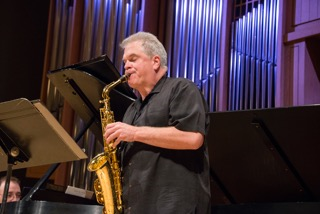 Dan and Patty (Boyles) Goble met at Casper College and through 30+ years of marriage managed to each build highly successful musical careers. The Gobles attended Casper College from 1978 to 1980, majoring in music. They continued their education at the University of Northern Colorado, both earning degrees in music education. Dan completed his academic studies at the University of Texas in Austin, receiving an M.A. and a Ph.D. in music. Patty embarked on a very successful career as a professional singer and actress. Each has performed at the highest level of his and her respective professions. Patty Goble’s resume includes Broadway performances in Ragtime, La Cage Aux Folles, Kiss Me Kate and The Woman in White. She performed in the national tour of Cats, in Music of the Night, as Anna in The King and I with Lou Diamond Phillips, in the PBS production of Candide with the New York Philharmonic, and in South Pacific at Carnegie Hall. Dan Goble is an accomplished saxophonist and arts educator. He has performed with the New York Philharmonic, the Brooklyn Philharmonic, and the New York City Ballet. He was a featured performer at the 2004 Thailand International Saxophone Conference in Bangkok, Thailand. Dan Goble is currently the Director of the School of Music, Theatre and Dance at Colorado State University.